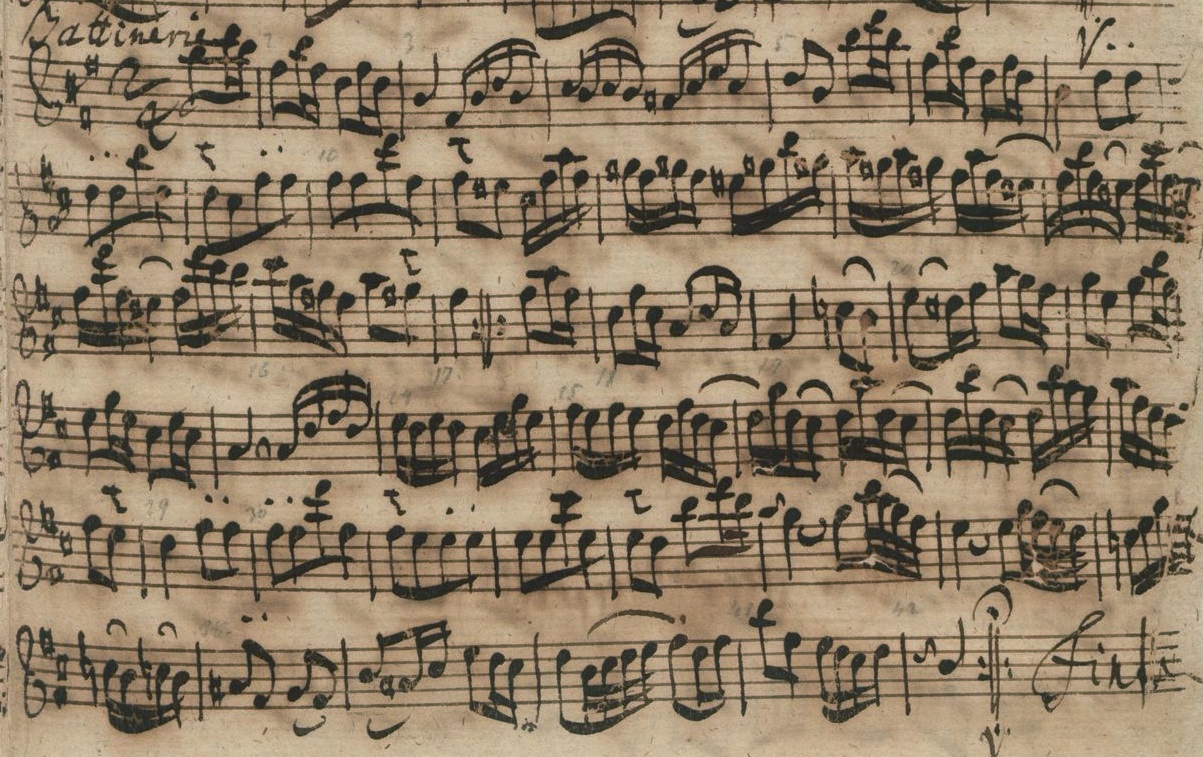 There’s a famous dictum that comes out of the early days of coding and computer building: garbage in, garbage out. In its original context, it had to do with a phenomenon where poor input data resulted in flawed outputs. Growing up, though, I heard it most often applied to music, of all things.

Most of the world has utterly unprecedented, constant, near-instant, near-infinite access to music. Growing up we had car radio, then customizable satellite radio; MP3 playlists burned onto CDs, then streaming playlists on smartphones. If you don’t mind ads, you can instantly call up pretty much any song ever performed online legally and for free; if you do mind the ads, you can do the same advertisement-free for pennies a day (or pirate it all illegally, which is also easier to do than ever). Obviously you already know all this, but our ancestors—even our grandparents—would be astonished at this development.

Don’t get me wrong, I enjoy and utilize this recent capacity for instantaneous music selection. As I’m writing this, I’m listening to a playlist on Spotify right now, in fact. But I started to wonder, is there is a dark side that needs to be addressed? With the removal of all the resistance to finding and listening to music—whether that was trekking down to a concert hall or running to the record shop—has something good been lost?

Practically everywhere you go, there’s a speaker somewhere playing some kind of music. We’re in the car, at home, at the gym, at work, wherever, and if nobody is actively talking to us—bam! In go the headphones, on goes whatever playlist or album the algorithm showed us first today, or whatever radio station the car is dialed into when we start the engine. Perhaps this isn’t always bad. Again, I’ve done this plenty of times, whether it was to muffle the sound of an obnoxious roommate or neighbor, to create a sense of privacy in a crowded library, or to try to relax after a stressful day. I don’t want to give up the ease-of-access that allows for these moments of escape. But I eventually had to admit to myself that sometimes that access was bad.

A lot of our music-listening is done uncritically because it’s easy and instant. Music has become a sort of white noise: a lot of times we’re not really listening—it’s really only on the outskirts of our consciousness, but it’s there influencing us nevertheless. Sometimes it’s obvious that this is bad; my husband and I went out to a coffee shop recently and both brought books to read, both of which required a hefty bit of focused reading to get the most out of. Like most coffee shops, the place was playing some mix of “alt/indie Millennial pop/rock” (you know, the stuff you had on at least one Pandora station circa 2010) at a decently loud volume. The tyranny of pop music has made it difficult to really chew on a deep thought or have a serious, intelligent conversation in most public places (and is likely deadening our capacity for music appreciation, too).

I think there’s something worse—perhaps even a little sinister—going on, though. When we get numb (or, worse, addicted) to listening to music, we become numb to what exactly that music is communicating. I know I had. The college lifestyle encourages a sort of insane, round-the-clock consumption of music. And putting aside, for the moment, the discussion about how that alienates people from one another—which is likely also true—it’s worth thinking about what kind of consumption that encourages. You get bored listening to the same stuff when you’re listening to music that often, so you start seeking out novelty. You start clicking around on whatever random playlist or station the algorithm offers you, whatever is trending and popular, and slowly, over the course of weeks, if not months or years, you find yourself listening to stuff that’s more brutal, more grating, more vulgar, more inhuman than you were before. At least that’s what happened to me. And the more music I listened to, the less it seemed to console me like it used to; the less it made me feel better, and the more it made me feel worse.

Garbage in, garbage out.

Odd as it may sound, that phrase has leapt into my mind from time to time with some pangs of conscience over the past couple of years. I started realizing that, yeah, I felt kind of miserable all the time, and maybe the miserable music I was listening to wasn’t helping matters. Maybe music is good when made and enjoyed correctly, but maybe it can also be bad. Maybe poor habits of consumption can lead you into a musical and moral quagmire, a place bare of the good, true, and beautiful that has nothing to offer your dilemmas other than sugar-coatings followed by more dilemmas.

I’d listened to smatterings of classical and sacred music in college, but the pressures and stresses of grad school and the last year pushed me to listen to more of it, as well as think a little more deeply about why I was listening to it. I found that the pop stuff I used to have on loop while working affected my mood in a different way than the new stuff. So much pop music now, whether or not it comes out and says it, is just so bleak. The whole thing, musically and lyrically, is functioning in a world without concrete meaning or absolute truths and goodness—and you can’t ignore that forever.

I’ll provide an example. Here’s a song I had on a playlist I used listened to decently regularly:

Now, don’t get me wrong: I think Billie Eilish has talent and creativity. Some of her stuff is off-putting to me, but some of it isn’t (hence, why I had this song on a playlist). This is definitely one of her more “upbeat” songs, and I chose it because I don’t think this music video is as actively disturbing as some of her others; she isn’t being burned with cigarettes or putting spiders in her mouth or coughing up slime. (If you are not familiar with her music videos, all of those are real things from three different videos.) Her work is certainly more musically interesting than a lot of the stuff that was popular when I was a teenager (her primary demographic), and it’s also less lyrically facile than what they used to play at school functions back in my day. So while it’s not as empty artistically, there’s still a sort of an empty view of the world—it’s dark, it’s bleak, it’s a bit alienating.

That’s not to say that you can’t deal with serious, dark things in music. Here’s a piece of music I found in the past year or so that’s captivated me:

This is “When I am laid in Earth,” or “Dido’s Lament,” from Henry Purcell’s opera Dido and Aeneas. If you’re unfamiliar with the mythic source of this composition, the short version: in the Roman poet Virgil’s Aeneid, an account of the legendary beginnings of Rome, the queen of Carthage, Dido, falls in love with the Trojan hero Aeneas. Aeneas is told by the gods that he can’t stay with Dido (he’s got to go found Rome, after all), and Dido sings this song before killing herself as Aeneas sails away.

So, yeah, kind of a downer…and yet, isn’t there something really different about this song in comparison to “bellyache”? This sadness touches on something deeper, more meaningful? I think that stems from a fundamental difference in how Purcell and his contemporaries viewed their world versus how our own contemporaries view ours. Billie Eilish’s sadness is malaise, it’s nihilistic, it’s bored. Purcell’s grief is redeemed, as it were, by its nobility, its tragedy, and its poignant beauty. Listening to Eilish on repeat makes me feel sort of numb and depressed; listening to Purcell on repeat would probably also make me sad, but in a somber, momento mori kind of way, the serious, not-despairing kind of feeling you get from looking at a still life painting. Sure, it’s sad, but there’s still something here that affirms life as good; it’s the kind of sad that makes you want to hug the people you love—a kind of sadness which is good—not the kind of sadness that makes you want to stare at the wall and yell at your mom—a kind of sadness which, I think we all can agree, isn’t good.

There’s plenty of not-sad classical music, too, and there’s plenty of more contemporary reimaginings of classical, baroque, renaissance, or other eras of music. The godfathers of “Gypsy Jazz,” Django Reinhardt and his group the Quintette du Hot Club de France, here with Eddie South, considered to be the first jazz violinist, have a delightful little riff on a Bach piece:

This isn’t “old sounding,” it’s not “formal,” it’s not “stuffy”—but there’s something about this that makes you interested in living life, in other people, as opposed to feeling churlish and hostile to the world around you. It’s not about being edgy or catchy; it’s trying something very new for the time, to be sure, but it’s still trying to sound good, to be beautiful music, just in a new way. It’s very human music.

And, before you ask, yes, I do think there’s music that’s being made now that fits this description, too. Not only are there some really interesting re-interpretations of classical pieces of music, but there are some musicians making their own stuff that I think is human and good. I think Johnny Flynn is a great example of music that, while definitely having strong roots in older musical traditions, is new, creative, interesting, and good:

There’s poetry and movement here. It’s lyrically and musically interesting, creative and new, but not sacrificing tried-and-true musical pleasantness for novelty. It’s decently simple: it’s a love song. It’s sweet. There’s meter, rhyme, melody, harmony, familiar movement, and none of it is terribly complicated. But it doesn’t have to be. It’s so very refreshing, so evocative, so good.

Maybe I’m over-thinking this—that’s always a possibility—but I don’t think that I am. I have noticed that, as I’ve become more aware of the things I spend my day listening to (and maybe even choosing not to listen to music my every waking moment and instead learning to enjoy quiet and silence), it does help my mood.

Like it or not, “garbage in, garbage out” is true for more than just computers: the stuff with which we surround ourselves day in and day out influences our mood, our thoughts—maybe even our heart. I think I like surrounding myself with things that affirm life as meaningful; I think I like creating a listening world that encourages gratitude and reflection; I think I like to tune my harp to cheerful strains:

What about you? What do you think? What kind of music helps spark wonder and joy for you?

Molly Lackey is a wife, author, and church historian. She has a Bachelor of Arts degree from the University of Alabama with a triple major in History, German, and Latin, and she is pursuing a Master of Arts in Early Modern European History, with an emphasis on the Reformation in Germany, from Saint Louis University. Molly has contributed to Words of Strength and Promise: Devotions for Youth (CPH, 2021), has written for Higher Things Magazine, and has appeared on KFUO. She enjoys reading and talking theology with other laypeople, creating art, and drinking tea with her husband. View more posts